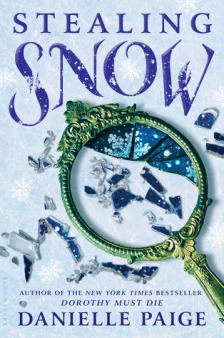 Source: Received a review copy from Netgalley in exchange for an honest review.

This was a book that I couldn’t miss during it’s release, there was soooo much hype built around it. I haven’t read the Dorothy Must Die series, but I heard amazing things about that series so when I found this on Netgalley I couldn’t help but request it. I think this is a retelling but honestly I’m not sure whether this really was supposed to be a retelling of Snow White or The Snow Queen. The only Snow White element it had was that whilst Snow was in the mental facility she called the seven pills she had to take dwarves, other than that it leaned MUCH more towards TSQ.

I had two issues with this, the abundance of YA tropes and how distant the world and characters felt. It followed the story of a girl who everyone thinks is crazy, but is just misunderstood and actually destined to rule a kingdom. WHICH I guess would’ve been FINE, if the characters and the world were complex and developed. But this story lacked both of these things. For the most part I felt like even the main character couldn’t care less about what happened to her in this story. Even the ending, had I been more invested I MIGHT’VE felt something for Snow, but even she felt like an outsider in her own story so it left me feeling a bit…meh. The aspect that got me through this book was the writing style, it made going through this book a little easier (it took me around a month to finish this book :/)

I feel like this was a book I could’ve done without, it didn’t really leave me feeling any type of way at all. I just felt so indifferent the entire time I was reading, which is probably why it took me so long to get through it!