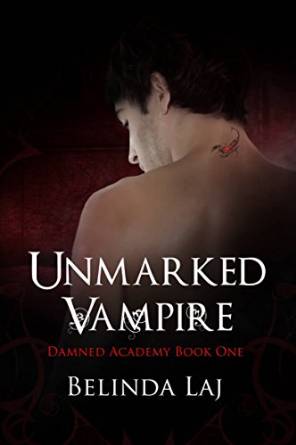 I thought Id try a different format to my reviews which will hopefully help me cut down on how much I write so it looks less daunting to read! Here’s what I thought of Unmarked Vampire:

This book had a really interested premise and when I read the blurb I knew I had to take this on for review! So without spoiling much the first chapter our main protagonist Julian Laurent wakes up in a coffin, he has no recollection of dying and actually no recollection of his past but… He wakes up in the hallway of an academy, The Damned Academy. I honestly loved the first chapter I thought it was such a great way to start this book, it really had me interested and engaged and I wanted to know where does Julian go from here?

We start off with Julian having no recollection of his past and pretty much until the end of the book we don’t really know about happened, but through the book we get little snippets of information. I appreciated the fact that Julian doesn’t know what going on, because I felt like I could connect with the character and the environment a lot more. This book presented a conflict that I thought was a lot more interesting than I’ve seen in other books. Whilst reading most YA novels we have a clear and distinct ‘villian’ whose intentions are pure evil and immoral etc. I found that with this book we really don’t know who is the ‘good guy’ and who we should be hating. So throughout the book I was back and forth between these two characters that both seem caring, protective and helpful to our main protagonist but its only until the end of the book that we really see that distinct separation between the two.

As there were aspects about the book that I loved similarly there were some aspects I weren’t too fond of. For the most part I really couldn’t stand the main character Julian Laurent, he really was obnoxious, annoying and quite frankly rude. But as his character develops you really begin to see him mature, and I partly blame his character for the fact that he doesn’t remember much from his past. I really loved the plot twist, REALLY loved it, it was for me completely unexpected and when you do find out about it everything from before clicks into place and makes sense. There were some grammatical errors, misspelt words but there were very few of them so I was able to overlook that.

I felt like there were some slow chapters in the middle but I kept on reading because although not much was going on we found out more about Julian and the Academy. My favourite chapters were the first and the last and I honestly think that the opening chapter for this book is one of my all time favourites. This is far from being a perfect book with some cheesy dialogue, and our main character having some over the top reactions but all in all I do think this is a decent book. If you’re looking for an interesting read that explores Angels, Demons and Vampires and a world where they coexist I definitely think you should pick this up!

Support the author and follow this link to buy her book!

If you’ve read the book what did you think? Comment below and let me know!